My Lit Box sends out a newly released book by an author of color on a monthly basis. Subscribers can choose to receive just the book for $17.00 or the full box plan for $25.00 which includes one or two quality bookish items. I got the full box because I love items! You can see my previous My Lit Box reviews here.

The theme of this month is “Growing Pains” and the book is It’s Not Like It’s a Secret by Misa Sugiura. It is described on Amazon thusly:

This charming and bittersweet coming-of-age story featuring two girls of color falling in love is part To All the Boys I’ve Loved Before and part Simon vs. the Homo Sapiens Agenda.

Sixteen-year-old Sana Kiyohara has too many secrets. Some are small, like how it bothers her when her friends don’t invite her to parties. Some are big, like the fact that her father may be having an affair. And then there’s the one that she can barely even admit to herself–the one about how she might have a crush on her best friend.

When Sana and her family move to California, she begins to wonder if it’s finally time for some honesty, especially after she meets Jamie Ramirez. Jamie is beautiful and smart and unlike anyone Sana’s ever known. There are just a few problems: Sana’s new friends don’t trust Jamie’s crowd; Jamie’s friends clearly don’t want her around anyway; and a sweet guy named Caleb seems to have more-than-friendly feelings for her. Meanwhile, her dad’s affair is becoming too obvious to ignore.

Sana always figured that the hardest thing would be to tell people that she wants to date a girl, but as she quickly learns, telling the truth is easy…what comes after it, though, is a whole lot more complicated.

I’m pretty excited to check this out! 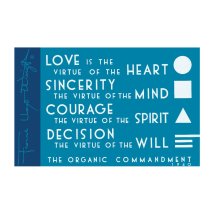 The first bookish goody is a magnet that has the Organic Commandment as described by Frank Lloyd Wright. I like what it says, I like the color, and I like how strong this magnet is. I feel like most magnets I get in these boxes are wimpy little things that look cool but don’t offer much in magneting. Not this one!

Next up is a bag from Chronicle Books that has a pair of specs on one side and “See Things Differently” on the other side. There’s a little pouch inside that it can fold down into for easy carrying.

The final item is actually another book, score! It’s Sunday Sugar by Q. Gibson. According to the curator, the protagonist in the main book this month uses poetry as her “secret language of choice.” I’ll be interested to try this out. I’ve been known to love some poetry from time to time so hopefully this will be added to that list!