The curator describes Blue Spider’s Attic as, “The magic of a used book store, delivered.” Except it’s actually even better because also, coffee! There are two different boxes available. First is The Attic Box by Blue Spider Press, which includes three second-hand books, a small package of coffee or tea, and several bookish items. This is just $21.99+ shipping if you buy a single box, though I paid $105.99+ shipping for a 6-month subscription, which is about $17.60 per month.

No matter which box you choose, you fill out a few surveys about your likes. The forms I filled out included clarifying language that assured me I was not guaranteed the genres I selected. You can read my previous Blue Spider’s Attic reviews here.

You guys, I’m really excited about the three books I received this month! They just keep getting better every month.

First is No Sleep Till Wonderland by Paul Tremblay, which is described on the back as an “offbeat and compulsively readable mystery.” This looks like a quick, fun read and after some of the heavier stuff I’ve been reading lately, I can’t wait to dig in.

Second is A Working Theory of Love: A Novel by Scott Hutchins, which Entertainment Weekly claims “hits that sweet spot where humor and melancholy comfortably coexist.” That’s my jam!

Finally we have The Transcriptionist: A Novel by Amy Rowland, which is actually a like-new hardcover – score! This one looks a little darker and is described by Rebecca Lee (who wrote Bobcat and Other Stories, that book I was nuts about a few boxes ago from Blue Spider’s Attic) as a “haunting, beautiful book” that “proves language can make us whole.” This looks like a rainy day read and luckily there have been plenty of rainy days in Iowa lately. 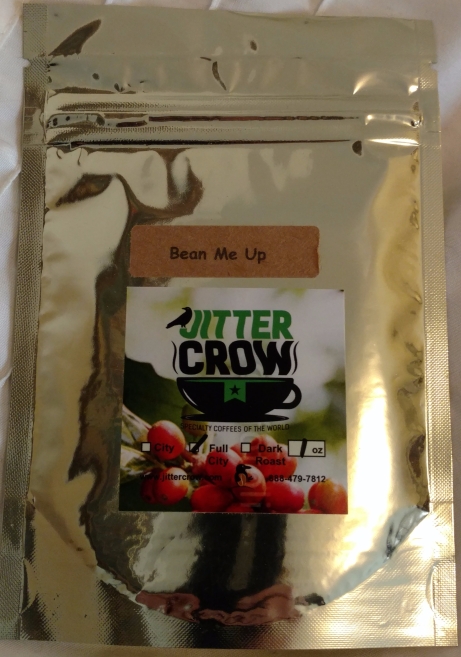 Now the stuff! The coffee this month was from Jitter Crow and it was delicious, as always!

The theme was Steampunk, which I was a little nervous about because while I appreciate Steampunk for others, it’s not really my jam. Not to worry, everything included was indeed my jam. 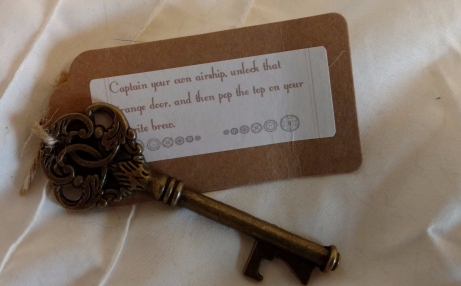 My (black) cat is in serious shed-mode – sorry about the cat hair all over my bedspread!

I gave this Airship Captain’s Bottle Opener Key to my boyfriend, who drinks a lot of fancy pops that require bottle openers. He loves it and it works really well. Plus, it’s cool and sturdy!

Then there was this cool little bag that had a Steampunk diffuser necklace. The way it works is pretty cool – you put a few drops of essential oil on one of the two cotton discs included (one is red and one is yellow) and then put it in the little cage.

I saw it and thought, damn, that’s cool, but I sure don’t have any essential oils. Not to worry – they included a sample size of The Coggler oil blend from Literary Apothecary. Awesome! It smells deep and and I keep wanting to say musty but that has a negative connotation. It’s like, if you were hanging out in a really old library and there was a hippy around the stacks. It’s a combination of that – books and hippies. It’s great!
Oh, and I guess described here. There you go!

So, yes, happy again. Thanks, people who send me these books and things!