As you may remember from my first review of Blue Spider’s Attic, I loved the experience but wasn’t a fan of the books. This month was a little better, as far as giving me books it was possible I would like, though it turned out I didn’t. Still loved this box though!

The curator describes Blue Spider’s Attic as, “The magic of a used book store, delivered.” Except it’s actually even better because also, coffee! There are two different boxes available. First is The Attic Box by Blue Spider Press, which includes three second-hand books, a small package of coffee or tea, and several bookish items. This is just $21.99+ shipping if you buy a single box, though I paid $105.99+ shipping for a 6-month subscription, which is about $17.60 per month.

No matter which box you choose, you fill out a few surveys about your likes. The forms I filled out included clarifying language that assured me I was not guaranteed the genres I selected.

The theme of this box was “Heart of Winter.” As I did last month, I forgot to take pictures of the books before I unwrapped them (I’m impatient!) but they were wrapped in festive bags and were fun to open.

The first book I received was Buzz by Andres del Motte. This was the sequel to The Game, which I received in last month’s box and didn’t enjoy so I just went ahead and donated this to my local Little Free Library.

Next was One Sunday by Carrie Gerlach Cecil. The story is that of a catty A-list tabloid editor from L.A. who gets pregnant during a one-night stand with a southern gentlemen. She decides to move to Nashville to have the baby and marry the guy she barely knows (who’s a doctor, obviously). It’s your classic fish out of water situation, except that there’s an added element of her being surrounded by Christians and then eventually being born again.

I wouldn’t have pegged myself as a fan of born again fiction, but in fact most of the writing was pretty fun. I liked the main character more before she turned into a “nice person,” but I found the whole thing to be much better than I was expecting – with a few exceptions.

The author is a white woman and she wrote in a few black characters. So, first of all, thank you for doing that, author – as you have likely noticed reading this blog, representation matters to me and I’m glad that a book set in Nashville, which is relatively diverse, has some diversity in it.

That said, damn, Gina, do you know any black people? There’s just a lot of clueless, annoying stuff like when the main character sees her hand against a black woman’s hand and thinks, “It’s funny; her hand is so much darker and softer than mine. It’s the first time that I’ve really noticed that we are very different colors.” Right, okay, that whole “I don’t see race!” thing that is not actually helping, and then the part where the main character is sitting between the black couple and she says, “We look like an Oreo cookie,” and then her black friends just totes crack up because SO FUNNY and I’m sure they’ve never heard that before!

And then there’s the part where she talks about the abortion she had years before, and how she regrets it, “I have chosen to destroy my own child. Our child. There is no way to ever tell him. Honestly, I don’t even kill bugs on the sidewalk. I step over them. I’m not political and I’ve always advocated my womanly right to do whatever I want with my own body. But it wasn’t my body.”

Right, you’re not political and you think women should be able to do what they want with their bodies, but also you say things like, “I paid someone to execute my child . . . I have slaughtered a piece of me today.” That doesn’t sound political at all!

As you can see, when I say this book was better than I expected, my standards were low. Extremely low.

Recommended for: Pro-lifers who want an Christian romance that has some snark and ends the way they’d like it to end

Does it pass the Bechdel–Wallace test? Yes

The third book was Emma’s Table by Philip Galanes. Described as “delicious” by Vogue and a “touchingly bittersweet comedy of urban existence” by USA Today, I found it to be neither.

The story revolves around Emma, a woman who is clearly inspired by Martha Stewart, Emma’s family, and Emma’s series of assistants. Emma is just out of prison and is trying to get back to life, and there are personal and professional issues she must work through. The story itself is okay and I can see that there would be an audience who would eat it up and be intrigued. But, spoilsport that I am, I had one huge issue with it: The way the author treated the daughter of one of the minor characters.

The daughter in question is named Grace and she is a child in elementary school. She is overweight, which you will never, ever forget reading this book because the author insists on mentioning it every single time the girl is brought up. He talks about her like she’s just this gargantuan person who has to walk sideways through doors, then later specifies that she’s 20 pounds overweight. I mean, I know she’s a kid, but still — that’s hardly the shocking obesity he insists it is. I mean, for real, these are just a few of the many, many examples of the way the author describes this girl:

“He remembered the first time he’d seen her, standing at his office door — as wide as a penny that had been left out on the train tracks flattened to twice its normal size by the force of a locomotive roaring through.”

“She was huge, he saw, when she appeared at the door.”

“Gracie barely fit into her swimsuit from the summer before. There were big handfuls of flesh, like yeasty dough, popping out from the edges of her Lycra suit — a fleshy jack-in-the-box all around.”

A stranger asks how old her daughter is and her mother responds thusly, “‘Almost ten,’ Tina told her, as nicely as she could manage. ‘Aren’t you, Gracie?’ she said, placing her hands on her daughter’s puffy shoulders, pressing down through the marshmallow of coat to the fat girl beneath.”

Later, we get even more information about the size of this girl, “Her nine-year-old daughter, barely four and a half feet tall, had weighed in at one hundred and fourteen pounds.” THE HORROR.

I don’t want to go on too much about how that’s not even that overweight, because I don’t want to give the impression that if this girl were actually very overweight, that it would be okay to talk about her like that, but it’s even more ridiculous when you’re talking about a chubby girl.

Needless to say, I won’t be recommending this book to anyone.

Recommended for: People who really hate fat people and like to see fat children shamed relentlessly.

Does it pass the Bechdel–Wallace test? No

Okay! But there were things in this box, too. Let’s talk about the things. 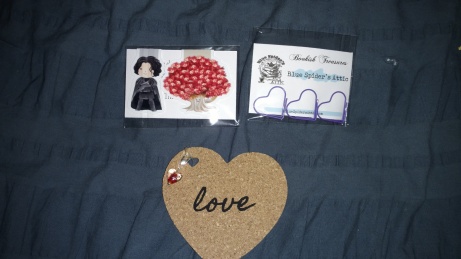 First of all, I got some Boca Java Coffee, which was good because coffee is good, you dig?

I also got a pair of Game of Thrones-inspired magnetic bookmarks made by Paperlyandco. I don’t watch GoT but these are adorable and I know someone who will love them. I think they’re a great addition!

Next were these heart shaped paper clips, which I have been using as bookmarks.

Then we have a heart-shaped coaster with the world “Love” on it, and a heart shaped blown glass charm. They suggest using it as a wine marker but I don’t drink so I’ll find another use for it.

Finally, a got a little bag that included a few pieces of Valentine’s Day candy.

I know I’m bitching a lot about the books in this box but I still think it’s a great box. These are used books and not necessarily books the curator recommends – it isn’t like other boxes where everyone gets the same options. I still think this is one of the best values and that it comes with some cool extras.