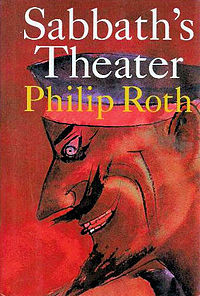 Philip Roth is one of my favorite authors, and while there is plenty to like about Sabbath’s Theater, I can’t help but feel that of the 15+ books of his I’ve read, none quite so perfectly showcases all the things that Roth does wrong.

There’s a lot of evidence that Roth is a misogynist, and while this book isn’t quite as anti-woman as My Life As a Man, it’s still a shining example of the way he treats his female characters. In Sabbath’s Theater, they are all completely one dimensional. Perfect or evil sums up the entirety of their personalities, and their only purpose is to propel the story of the men – usually by being a penis-receptacle.

Fans of Portnoy’s Complaint will love this book, because it’s chock full of eye-roll inducing ‘sexy’ scenes. I know many people who’ve only read a book or two of Roth’s think this is what he’s ‘known for’, but I assure you his better books don’t fall back on this stupid, “I’m going to titillate and shock people now!” trope. I’m certainly not offended by these scenes, I just find them dull and unimportant in the grand scheme of the plot.

All that said, Roth’s mastery of the English language is as apparent in this book as in most of his others. There are a few particularly clever parts that did warrant a chuckle from me. I know there is an audience out there for this book, as evidenced by the fact that it won the National Book Award and was short-listed for the Pulitzer, but that audience is not me.

“By the middle of the day I think the day has just gone on long enough and there’s only one way to make the day go away, and that is either booze or bed.”

‎“It is proposed that happiness be classified as a psychiatric disorder and to be included in future editions of the major diagnostic manuals under the new name: major affective disorder, pleasant type. In a review of the relevant literature it is shown that happiness is statistically abnormal, consists of a discrete cluster of symptoms, is associated with a range of cognitive abnormalities, and probably reflects the abnormal functioning of the central nervous system. One possible objection to this proposal remains – that happiness is not negatively valued. However, this objection is dismissed as scientifically irrelevant.”