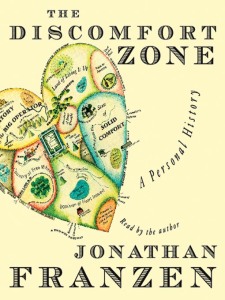 What the hell, Franzen. I love your fiction! Strong Motion was fantastic. The Twenty-Seventh City is one of the best first novels I’ve ever read. When I got done reading The Corrections I missed the characters for months. Actively missed them! But your non-fiction? God damn, I hate it.

I read How to Be Alone (his collection of essays) years ago and I hated it. I guess I though The Discomfort Zone would be different, or maybe I just forgot how much I hated How to Be Alone.

Part of the problem is that you think you’re so damn clever. And the thing is, I think you’re so damn clever! But your smugness is just a huge turn off. Your privilege is disgusting – especially in the chapter where you go on and on about how obnoxious and annoying it was to have to listen to people asking for donations after Hurricane Katrina. Yes, I get that you think FEMA should have done a better job doing . . . well, their job. But god damn. An entire chapter, 1 of 8 chapters in the whole book, about how annoyed you were to have to listen to aide commercials?!

Yes, yes, I’m simplifying that chapter. Yes, I’m exaggerating. But here’s what you need to know: Franzen is a smug, self-satisfied liberal who is entirely too proud of being such. I do not want him on my team. From now on, I’ll be sticking to his fiction.