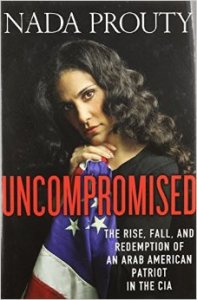 I was not familiar with Nada Prouty’s story prior to receiving Uncompromised from the LibraryThing Early Reviewers program and I’m not sure I can say I’m particularly glad to know it now. Mostly it was just completely disgusting and made me embarrassed for my country and what was done to her.

Nada was born in Lebanon and came to the United States both to get away from her incredibly oppressive family and to get an education. She made some mistakes when she was first here, most notably marrying a man in order to gain citizenship, but her eventual service to our country should have made up for it. She went on to serve in both the FBI and the CIA and by all, er, most accounts her first -hand knowledge of the Middle East and the Arabic language were extremely valuable.

Then of course she gets completely shafted for no real reason. You can see it coming a mile away, not just because of the revealing title, but because it’s set up in a pretty obvious way.

Overall this was an interesting read, though, again, it embarrassed the hell out of me. I also found the flow to be a little off. The first 3/4 or so dealt with her life in Lebanon, her immigration to the United States, and her service to the intelligence communities. Then it dealt with the ‘fall’ and that portion felt a little rushed and wasn’t nearly as detailed.