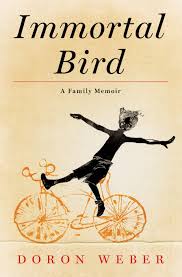 This review is probably the most difficult I’ve ever had to write. Immortal Bird is a father’s memoir that details the months leading up to his son’s death. What this father went through is beyond my comprehension, and I knew that it would be a deeply emotional book. Unfortunately, I cannot say that the book hit the mark for me.

It’s obvious that the author needed to write this book. I found myself constantly imagining him sitting alone in a room, remembering every last detail of his son’s disease, and the countless hours he and his wife spent trying to find a way to battle it. I can’t begin to imagine how completely devastating the writing of this book was, but it seems it was something the author needed to do in order to make some sense of the tragedy his family endured.

While it isn’t terribly written, it really feels like something that would be of great interest only to his family and friends, or perhaps parents who’ve seen their children go through this particular disease. Overall though, the book was much more about a disease and much less about Damon, the boy who succumbed to it.

It was also a little awkward reading the author constantly trying to convince the reader that his son was the greatest/smartest/bestest ever. Obviously, as a father, you feel that way about your son. And if the book was written differently, I may have thought he was a pretty exceptional kid myself. However, it seemed that every other page was the father telling us how no kid had ever done xyz as well as his kid, and how every person who met him was just completely flabbergasted that such a perfect person could exist. It really made me wish that I could have pushed aside all the father’s biased descriptions to really get a glimpse of who Damon was.

I received this book through the Goodreads First Reads program and I was initially pretty excited about it. As I continued to read though, it became obvious that I was going to have to write a mostly negative review about an incredibly personal book, and in the end I wish I just hadn’t read it. Unfortunately I cannot recommend it to anyone, because, for me, it really failed to do what it set out to do.