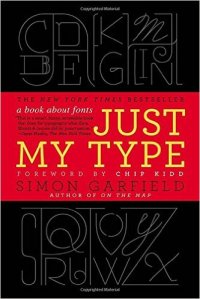 I’ve received dozens of books from the GoodReads First Reads program this year, but I was more excited about Just My Type: A Book About Fonts than I had been about any of the others. What can I say, I’m a nerd for words!

It started out strong and immediately starting poking good humored fun at comics sans. There was a ton of information and really interesting anecdotes packed into the pages of this book, and the writing was mostly amusing and laugh out loud funny in a few places.

Mr. Garfield certainly did his research and I really did learn a lot from this book. I learned about a study done in the ’40s that showed that the easiest fonts for people to read really have nothing to do with the way the fonts are designed, and everything to do with how frequently we see a particular font. I learned that we can read lower case much faster than upper case, and an argument was made that all road signs should be in lower case. I learned about some of the politics behind fonts, which I would never have even considered.

All that said, I did have one main issue with this book, which was that many of the chapters didn’t end, they just stopped. I had an Advance Reader’s Copy, which can sometimes get a bit wacky, and there were several chapters that ended so abruptly that I actually looked to make sure that I wasn’t missing pages. Some topics were really delved into and tons of details and background information was given. Other topics were just touched on, or a theory was given with no information to back it up.

Overall, I really enjoyed this book and I would recommend it to anyone who’s interested in past, present and future of fonts. However, I think there was a better book in there, if some additional details had been added or weak chapters had been deleted.